← more from
Constellation Records
Get fresh music recommendations delivered to your inbox every Friday.
We've updated our Terms of Use. You can review the changes here. 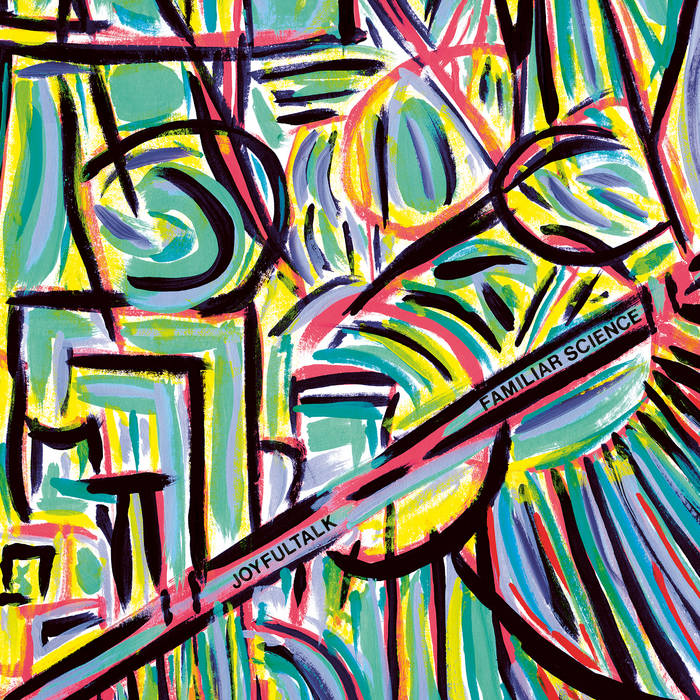 watercoolerdictator This album somehow manages to be maddening and brilliant at the same time. Step this way for some freaky jazzy exuberance.

JOYFULTALK returns with its third album for Constellation; another vibrantly divergent stylistic take on the analog materiality and sensibility of electronic composer-producer Jay Crocker, whose previous two records forged trance-inducing polyrhythmic intricacy, each from a distinct angle and sound palette, each enlisting a single instrumental collaborator. Familiar Science rallies contributions from a larger cast of musicians into a looser, cosmic recombinant combo—still shot through with JOYFULTALK’s singular mixing desk kinetics, but this time deep-diving into gnarled and twisted, spliced and diced out-jazz. Crocker draws inspiration from 1980s M-Base music and Ornette Coleman’s harmolodic funk period, while his own prior history as an improv guitarist also resurfaces for the first time in many years—an element in this polyvalent artist’s chemistry set that hasn’t appeared prominently in his own music for over a decade.

Crocker weaves all these raw materials into exuberant compositions that blur the line between sizzling corporeal combo and sampledelic futurist jamz, variously conjuring (leftfield) Flying Lotus, (later) Tortoise, BADBADNOTGOOD and Squarepusher’s Music Is Rotted One Note. The rubbery hyper-compression of boom-bap opener “Body Stone” initiates the séance, and the album offers a panoply of skittering grooves and soaring melodic pathways thereafter, through quags of heady jazz alternately streaked with dayglo delirium and other more vaporous states of revelry. Crocker’s own wordless stacked vocals are the giddy secret sauce on several cuts, and his lead guitar work (in kinship with the lean progressions of Mary Halvorson or Jeff Parker) features on “Take It To The Grave”, “Stop Freaking Out!” and the album’s title track. More honeyed passages on songs like “Blissed For A Minute” and “Ballad In 9” center around Nicola Miller’s buoyant alto sax and flute.

Bandcamp Daily  your guide to the world of Bandcamp

Quelle Chris joins the show to discuss his most recent release, "DEATHFAME"